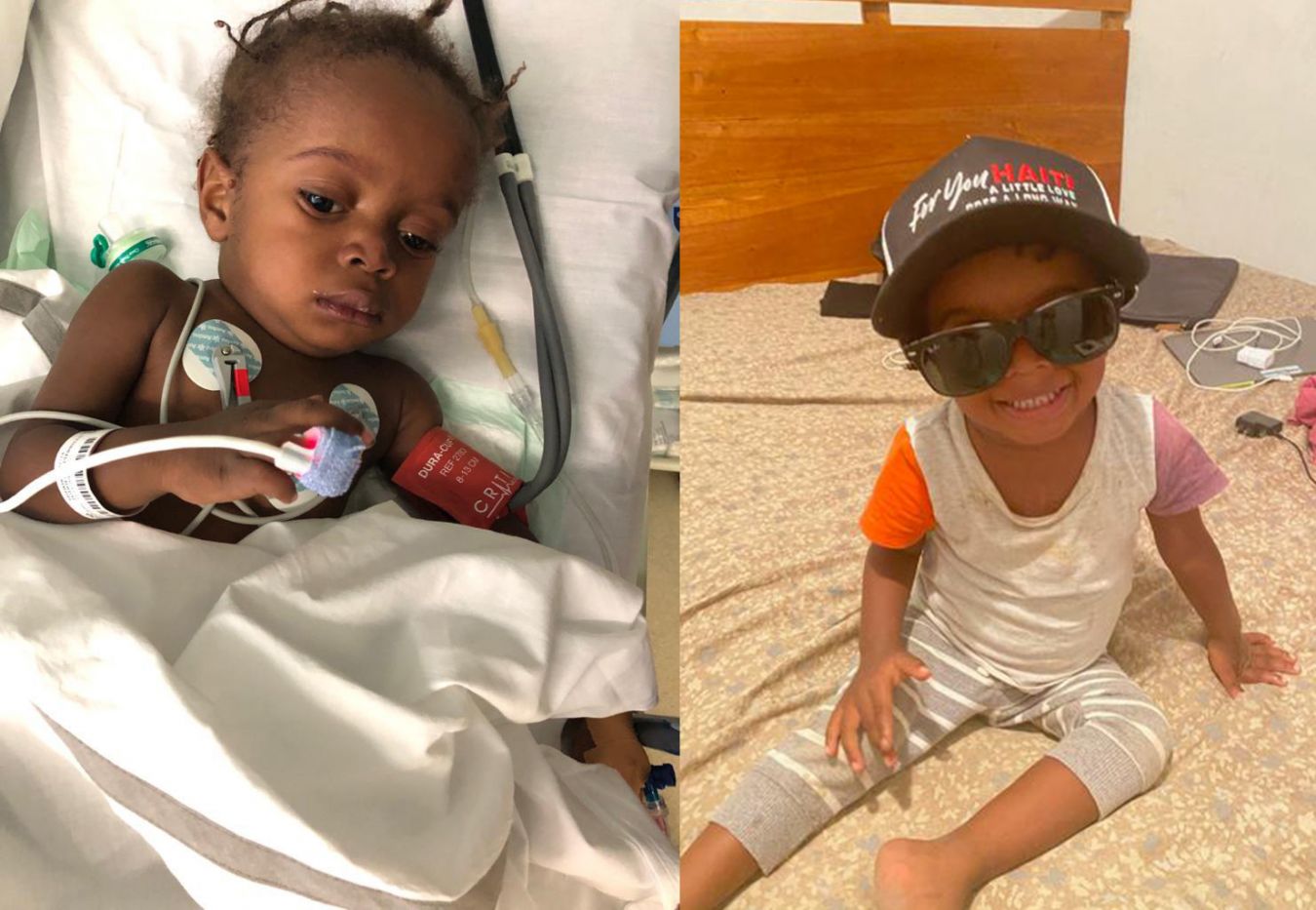 In February 2019, For You Haiti received a tiny patient at their medical clinic by the name of Podolsky (Baby Po). Po was almost two years old but couldn’t crawl, walk or talk. He was severely malnourished and cried out in pain if anyone touched him. He was brought to the clinic by his mom, Sherline, who was a single mother. Sherline had done the best she could to provide for Po, but something was wrong. For You Haiti sent Po to the hospital for tests and he was in urgent need of life-saving heart surgery. If he did not receive the surgery soon his heart would be inoperable and there would be nothing they could do.

The type of surgery Po needed was advanced and could not be done in Haiti. For You Haiti did not give up and promised Po and his mother that they would help to find a surgeon. Days turned to weeks and Po was in terrible pain. He, and his mother, did not have a place to live and hardly any food to eat. Samuel, President of For You Haiti, offered them a place at the For You Haiti house while the medical team searched for a surgeon.

A generous donor sponsored Po and assisted with medical appointments, medicines, travel, and food. With these basic needs met, Po began to blossom. Although he was still very sick, he started smiling and taking his first steps. He loved music and playing with neighbors and anyone who was in the For You Haiti care house. He quickly won over the hearts of everyone he met. The search continued for a surgeon that could repair Po’s heart.

Po dealt with many medical complications and just days before Christmas he was rushed to the hospital with a terrible flu. Miraculously Po pulled through and was able to return to the For You Haiti care house on Christmas eve. Shortly after For You Haiti received amazing news, a hospital in Spain had accepted Po as their patient and would book him for the heart surgery he so desperately needed. It was a Christmas miracle!

On February 23rd Po and Sherline set off on their first-ever plane ride to Barcelona, Spain for the surgery. They were accompanied by For You Haiti’s medical coordinator, Jony, as an interpreter, supporter, and friend. Po underwent many medical tests to prepare for the surgery. Finally, the surgery date was set for March 11th, 2020. The day came and Po was taken into surgery. Sherline waited anxiously with Jony. Nine hours later they received the good news that the surgery was successful and that Po was moved into the ICU to recover. Little did anyone know that during this surgery the world outside had dramatically changed. COVID-19 was spreading like wildfire and countries were beginning to shut down. Spain went into complete lockdown. Jony was put in mandatory isolation for 14 days and was unable to assist Sherline with translation or anything else she or Po may need.

Po began to take a turn for the worse and struggled to breathe on his own. His lungs had begun to fill with blood. He was whisked away for an emergency lung surgery and to attempt to make another small repair in his heart. While waiting to hear about the status of her son, Sherline fell ill with a fever. Due to concerns around COVID-19 she was asked to leave the hospital and not return until she had a negative covid test. For five long days, Po was without his mother or Jony as he recovered from these major surgeries. Finally, Sherline received her negative test and was able to visit her baby.

The doctors informed Sherline that they were able to make a small repair to Po’s heart but that Po needed another open-heart surgery. Po remained in the ICU for two weeks on oxygen as he recovered from his surgeries. Po began to heal and recover but doctors warned that Po will need to return to Spain for another heart surgery once his heart is bigger.

Po and Sherline returned to Haiti and remain at the For You Haiti care house as Po grows and prepares for his next journey to Spain to mend his heart. The doctors believe that after this next surgery Po will be completely healed and in normal health. Hope was restored in Shirline and Po through the kindness and generosity of For You Haiti and now Po has the chance to live a healthy and happy life.

Every day hundreds of Haitian children go without the necessary medical attention due to lack of services available and because they are unable to afford the cost of care. For you Haiti was grateful that they were able to step in and help Po before it was too late. For You Haiti has witnessed many medical miracles like this one and it is all made possible by donations and assistance from our compassionate and caring donors. 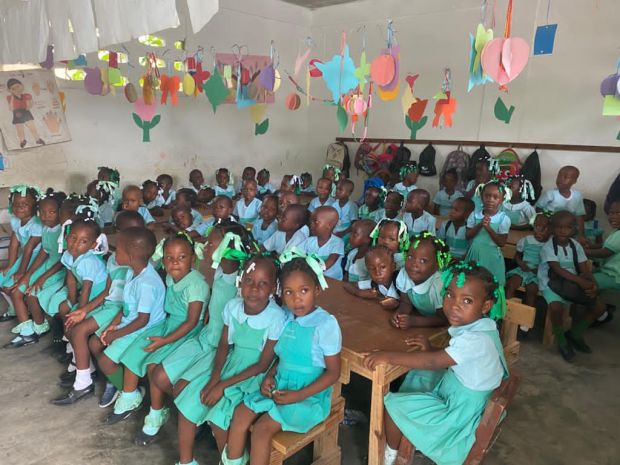 Sustainability Starts With An Education

September 8, 2022
Scholarships Help To Provide Access  Haiti’s school system is dominated by the non-public sector, whether for-profit, faith-based or run by non-governmental organizations.  This means that families must pay tuition to enroll in school and in addition they must purchase uniforms, shoes and books.  FYH’s education program allows an opportunity for families to apply for assistance making an educa… 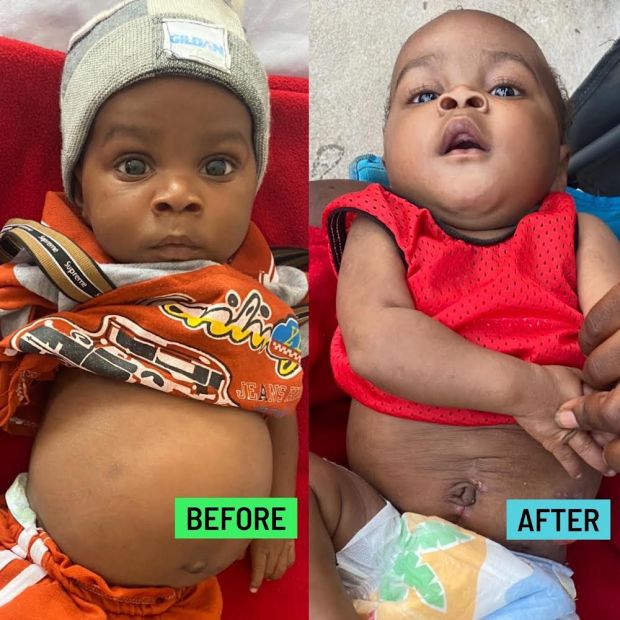 September 8, 2022
Immediate Intervention Beautiful baby Alexandro was born on La Gonâve island last year. It became immediately obvious that he had a medical problem and our team flew him and his very young mom by air ambulance to Mirebalais Hospital on the mainland. While at Mirebalais, Alexandro was diagnosed with Hirschsprung disease (causing him extreme difficulty to pass stool) and we discovered he neede…

Samuel Michel- President For You Haiti

September 8, 2022
Samuel Michel Born in 1978, Samuel Michel grew up in a  village of La Gonâve Island, Haiti, called Mare Sucrin. Samuel had access to a primary school education because he was a sponsored child of Compassion International. As a young boy his dream and passion was to help his community. After primary school he moved to the city of Anse-A-Galets, where he continued with his secondary education…. 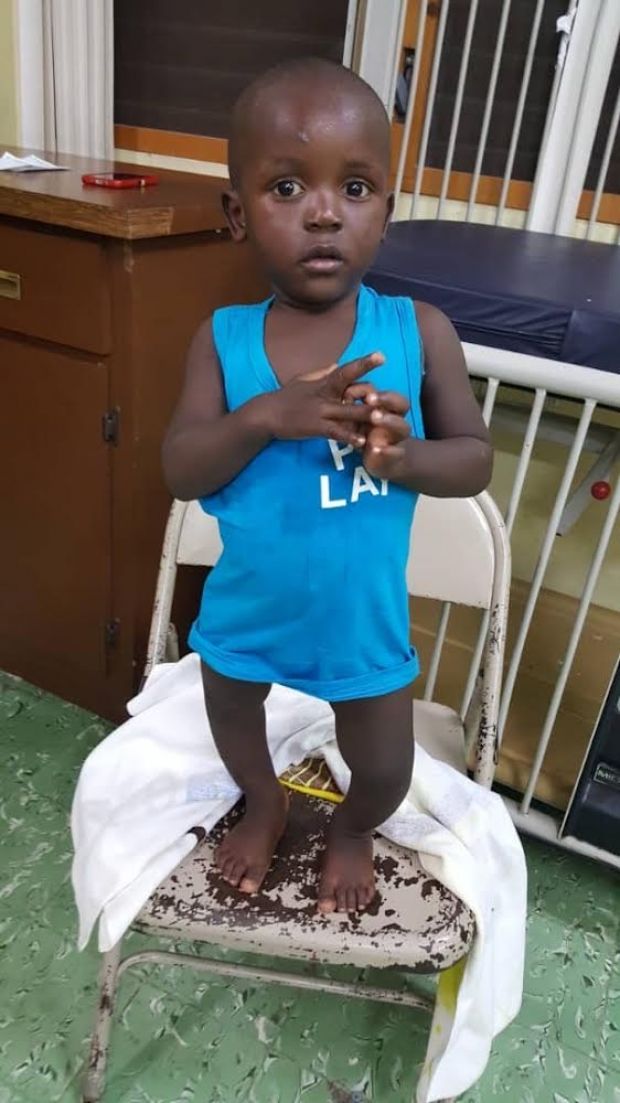 August 4, 2022
Damus John Wesmayly  Damus was seen by an orthopedic surgeon and it was determined that he would need to have growth plates put on both of his legs. This will straighten his legs as he grows. It’s a less invasive procedure than TSF frames, that some children need to correct the condition. The correction process can take anywhere from 6 to 12 months, depending on the child’s growt… 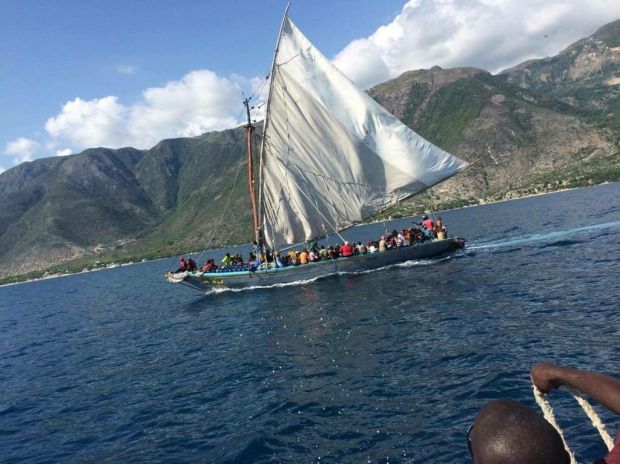 August 4, 2022
Bourdeau  For You Haiti has three team members living and working in the capital of Haiti and main island, Port-au-Prince. Bourdeau is our Operations Manager and he oversees all of the patients’ travels while on the mainland. He coordinates with the For You Haiti team everyday as well as the hospitals and doctors. He also checks in on the families multiple times a day. His passion for our pati… 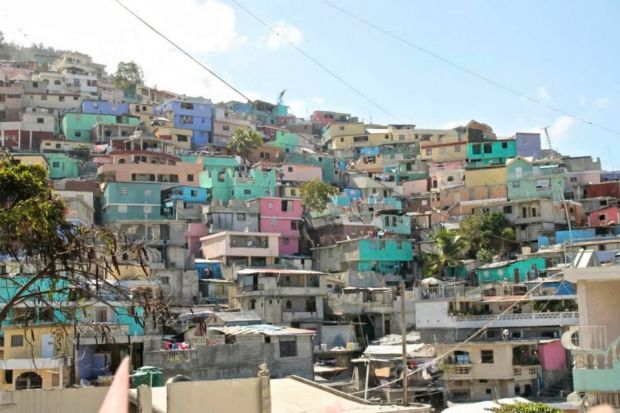 August 4, 2022
Challenges in Haiti Haiti has continuously struggled to meet the basic needs of its people. Political instability and gang violence have plagued the main city of Port-au-Prince over the last few years intensifying the struggles for all Haitians. Over one third of the population lacks clean water and two thirds have little or no sanitation. Slightly less than half of the Haitians 15 years old a… 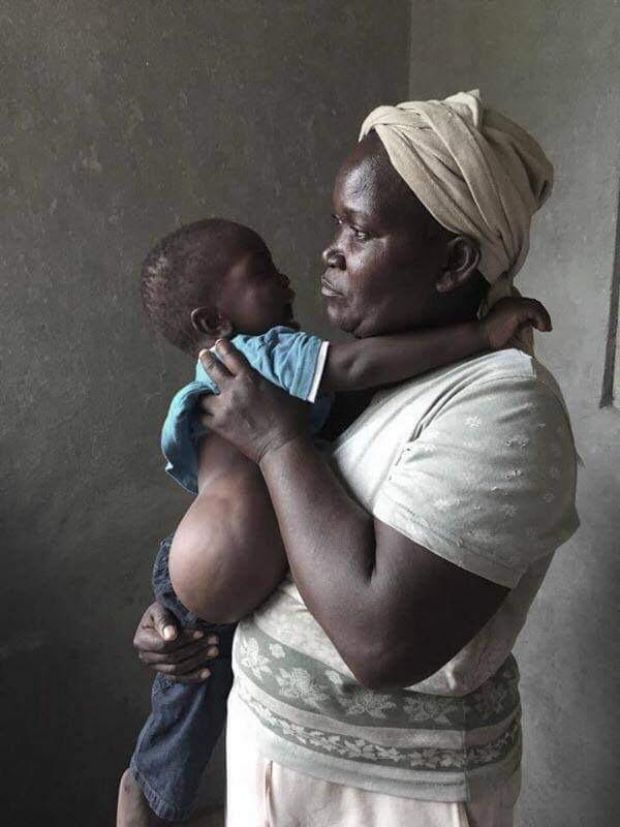 July 8, 2022
This month, through our partnership with Childspring International, we now have the opportunity for a child in our program to receive critical surgery in the United States.  Benaja is a 9-year-old boy living with his family in Ansé-A-Galets and attending For You Haiti’s school.  He was born with a rare abdominal wall defect called Omphalocele.  This is a birth defect where the infant’s intestin… 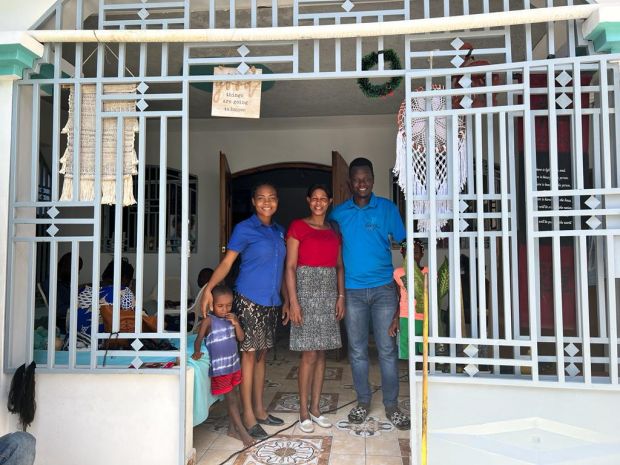 July 8, 2022
Our Care House has been located in Terra Rouge, about a 20-minute drive from the main town of Anse-a-Galets.  We originally decided on this location because of its quiet setting, away from the hustle and bustle of life in town.  However as gas prices continue to rise, and our patients are requiring daily and sometimes twice daily visits from our doctors or nurse, this has become a significant c… 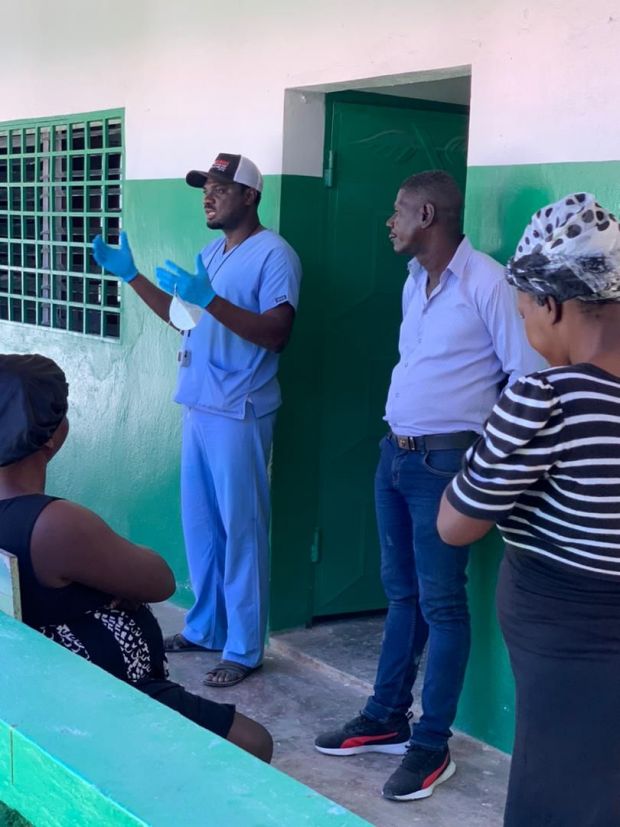 July 8, 2022
Several times a month, FYH team members led by Dr. Junior travel to one of the 11 sections (villages) on La Gonâve. These clinics provide regular exams, ultrasounds, lab tests, and family planning education for both men and women. The FYH team is very proud of the growing numbers of women at each clinic and the partnership being forged with local leaders and healthcare professionals. Building t… 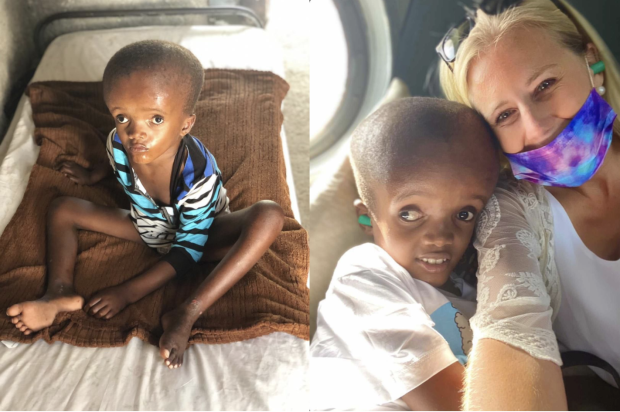 November 23, 2021
Abacky was a healthy little boy and loved walking in the garden with his mother and walking with his big sisters to school. He had a normal and happy life until he was struck with hydrocephalus. Hydrocephalus is a build-up of fluid around the brain and must be treated or can be life-threatening. At the age of 6, the disease had taken hold of little Abacky. The pressure of the fluid on his brain…